It has been a BEAUTIFUL fall so far here in DC. Seriously...I love fall, but I am in love with Fall 2010. Last year it seemed to rain every weekend and got cold and yucky very VERY quickly. While this fall has also flown by, every weekend has been sunny and comfortable. My favorite parts of fall; crisp cool air, the unique fall smell, and the glowing colorful trees, have all given us plenty of time to enjoy the season as we ease into what I now call "the dark months" (because I don't see a ton of daylight :-/ ).
Two weekends ago, my friend Danielle and I decided to escape city life of DC and head out to Cox Farm for all things fall; a hayride, apple cider, farm animals, and most importantly to pick out our pumpkins! It was so much fun!
The farm market was full of all sorts of beautiful squash, pumpkins, and apples!


Danielle and I wandered around the farm, checking out the animals, tasting some cider, going on hayrides, and taking pictures with the various cardboard things they had around. 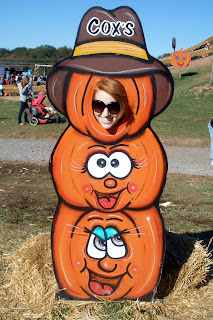 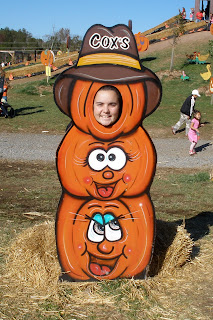 After wandering around the farm a bit we went on pretty much the most random hay ride ever! There were tons of random characters and things poping out at you along this hayride. There was even a Where's Waldo off in the distance at one point...I found myself wondering how many people really noticed him. Here are some picture highlights:

On our way out of the farm, we picked out some pumpkins. We each got a little pumpkin for free...and then we each bought a big pumpkin for carving! There were lots to choose from! 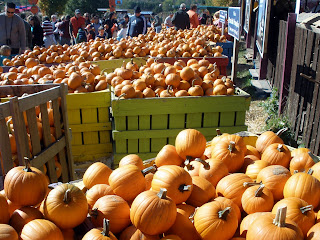 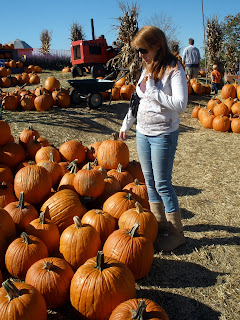 The next day...I had a few friends over (including Danielle) to do some pumpkin carving! Of course I felt very inspired to make seasonal treats!
I have to comment that the pumpkin cupcakes were REALLY easy. You can make them with a simple edit to  yellow cake box mix. I found the recipe on on Real Simple. But I did my own thing with the cream cheese icing. I usually make cream cheese icing by taste, because I like it SUPER cream cheesy :-).
We did some pumpkin carving. I had the neatest pumpkin I've EVER seen. I opened up my pumpkin and it was basically hallow with four patches of seeds going down the sides. And it wasn't gross and slimey to clean out at all! I was so proud of my pumpkin haha! I only got one picture carving....the rest are the completed pumpkins.


We of course baked all the pumpkin seeds! We did half of them a sweet and salty flavored mix that I also found on Real Simple. The other half we did traditionally. Both flavors came out GREAT! :-) 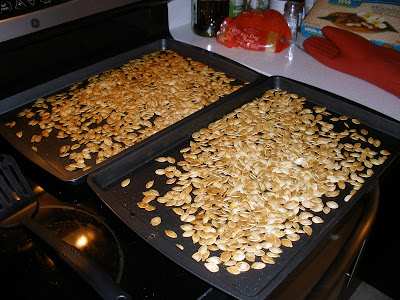 I had such a wonderful weekend celebrating fall at the farm and carving pumpkins! But I learned a valuable lesson....carved pumpkins go bad A LOT faster than I remember as a kid....my carved pumpkin didn't even come close to making it to Halloween (not that I thought it would really last THAT long but)...it didn't even last a week actually. I felt so sad when I had to toss my perfect pumpkin less than a week later :-/. But I took advantage of lighting him up when he was around. Next year I will try to do the pumpkin carving a bit closer to Halloween! :-)
Posted by Laura at 12:50 AM