For the past few years I have been the proud owner of one of the ugliest floor lamps ever. Here...judge for yourself: 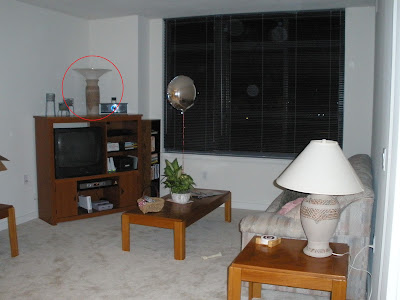 And yes that is the best picture of the lamp I could find because 1) it was ugly so I didn't take too many pictures of it, and 2) it was ugly so I hid it behind the TV cabinet.
Recently I got a nice new TV and cabinet (and then a new coffee table and lamps for my birthday!) So with all my new living room decor, it was time to get rid of the ugly lamp.
I asked some friends if they needed it (totally expecting no one to say yes because....lets say it together...its UGLY). My friend, Sam, seemed to be considering my "free lamp" offer. He joked that it would be funny to turn it into a palm tree. I agreed, and even offered to help if it would get it out of my house. But alas, it was just a joke and weeks later, the ugly lamp was still standing in the middle of my bedroom looking uglier than ever.
Then...it dawned on me!
Sam's birthday + need to get rid of lamp = BEST PALM TREE LAMP BIRTHDAY PRESENT EVER! (............hopefully)
I was excited and a bit nervous to take on this challenge. So one Saturday, Milo and I headed out to the empty lot across the street lugging a large lamp and some brown spray paint.
Funny story, when I brought the dry brown lamp back inside, the front desk lady said "oh so you just switched that old lamp out for a new one!" and I was like "well actually I just painted it"....she was amazed...like seriously amazed that I would (have done/been able to do/thought to do) such a thing...as was one of the office staff leasing people....I was sort of just amazed that they were so amazed.
The painting was the easy part. I decided, with a helpful suggestion from a coworker (Thanks Deanna!), to make the leaves out of wire and fabric so that they were more like a lampshade but also sort of flexible. I chose 18 guage wire and cut out a stencil of a leaf in some cardboard. I bent the wire around the stencil, cut out some fabric around the wire, and sewed the wire into the fabric around the edges. Each completed leaf looked a little something like this: 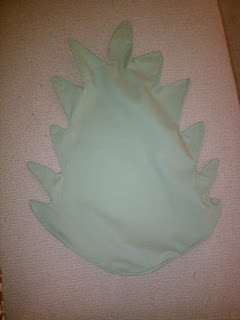 I know...doesn't really look too much like a palm tree leaf. At this point the leaf took me a bit longer than expected and it wasn't looking as I had originally envisioned...I was contemplating giving up. But then I did this.....and I knew I was heading in the right direction! 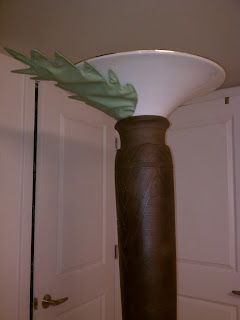 So I kept going. To try to make the tree have some texture I got some light green and some dark green fabric. My original plan was to make 5 light leaves accented with 3 dark leaves. I wound up running out of time (and the lamp shade was significantly covered with 7 leaves) so I ended up with an awkward 5 light and 2 dark. I figured if necessary I could edit later.
The night before I finished, I blew up a few balloons, mixed together some flour and water, and had a stab at making paper mache coconuts. I have to tell you this made me a bit nervous. I haven't done paper mache in god knows how long, and nothing as crafty/possibly tricky as molding a balloon. I was nervous because I had heard horror stories of the paper mache sphere getting all messed up when you pop the balloon and the thought of putting all that time and mess into something that could break so easily and not work out would have been annoying. (I am also not a big fan of popping balloons...all those kid games where you had to sit and pop a balloon to win a race....NOT a fan). Here is a tip! If you put a piece of tape on a balloon, you can poke a hole in it through the tape and it wont POP...it will just release air. Once enough air is leaked out, you can cut the balloon with scissors letting out a lot of the air, and there is no damaging (and scary) POP. It worked like a charm and my paper mache coconuts came out better than I hoped.
I don't have pictures of making the coconuts because it was super messy....I wouldn't have dared touch my camera or phone.
Once the coconuts were done and spray painted brown, I used a hot glue gun to attach the leaves to the original plastic lamp shade, and string and wire to attach the 3 coconuts to the base of the leaves. I covered the edge with a band of dark green fabric.......annnnnnd..... voila! 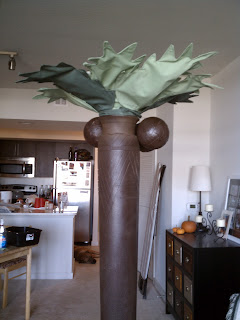 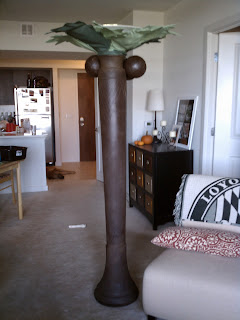 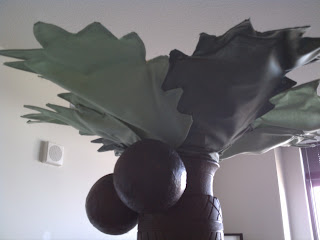 I made it so the lamp shade/leaves could fully come off as one piece, the coconuts another, and then the base of the lamp on its own so that it was easy for transporting.
Another funny story...two guys saw me lugging the tree (as the whole tree because it was easier to carry that way) down the hall to go to my car. They held the elevator for me and didn't say anything about the fact that I had a huge palm tree lamp thing with me. It was like this awkward giant elephant in the elevator. So I was just like "Does it look like a palm tree???" and they started laughing and saying that they didn't even realize I had made it....I hadn't told them I had made it....I think they realized and were trying to be nice hahaha....
I have to say, even though its not the best looking palm tree lamp I'm sure...I was pretty proud of myself with this project. I wasn't sure I'd really be able to do it at first, and almost gave up on the idea once or twice...but I'm really happy with how it turned out. I was able to surprise Sam with it when we surprised him this past weekend for his birthday. His reaction? "You did NOT bring that ugly lamp over here!"...but really after the initial shock...I think he liked it (or at least he told me he did).
Sam...if you are reading this....seriously do not feel obligated to keep it.....it was more for the laughs....I won't be insulted if it mysteriously disappears hahaha. It was actually more of a selfish gift being able to do something fun to get the ugly lamp out of the house.....(Sidenote: I'm not a 100% evil friend...I did get him an actual birthday present as well).
So there you have it....one of the many things that has been distracting me from blogging.....more to come!
Posted by Laura at 6:00 AM