Milo and I have been doing a ton of walking lately. Since spring has sprung I have been really motivated to walk around the city. I’ve also been motivated after finding the website & app Runkeeper as well as investing in a FitBit. Both those tools have really gotten me out exploring how walkable DC really is! Since March Milo and I have already walked a total of 72 miles! I have been posting a lot of these walks on Facebook, but one day my sister commented “I want pictures not run maps!”

So, at Leslie’s request, here are some fun pictures from our recent long walks!

This was our second long walk during our Food Truck Weekend. You can see the map of this walk here.

Milo got to experience the Cherry Blossoms at the Tidal Basin this year. It was really really crowded and I sometimes felt bad for Milo being slow low in the crowd…he got ran into a good amount. But he was a good sport and we got some pretty pictures. 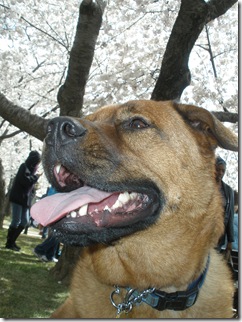 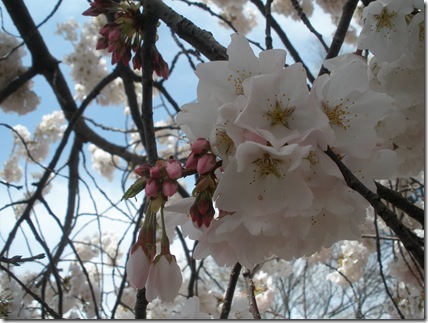 We also walked to the Lincoln Memorial…by that time it was warm and Milo was pretty tired. We decided to take a break and before I even put our stuff down…Milo had already lie down! 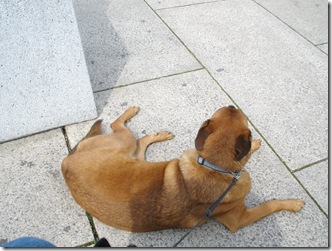 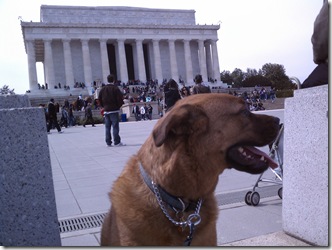 You may recall this picture from my last post: 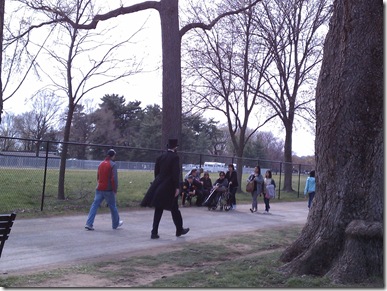 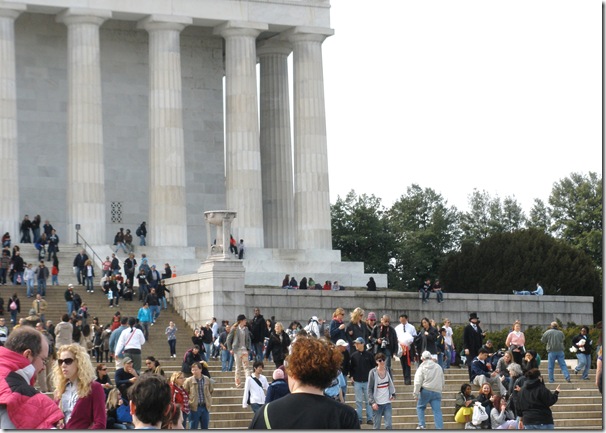 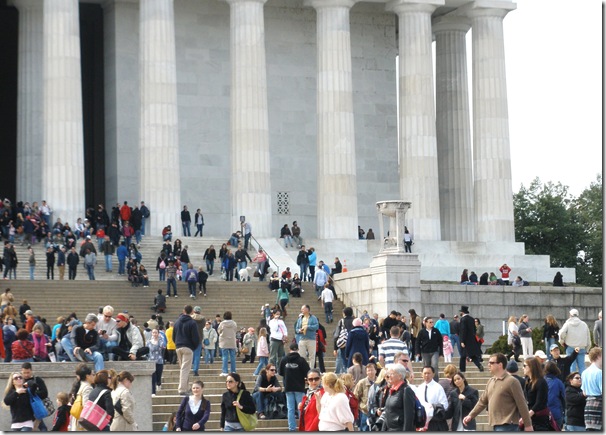 We had a great walk…but I think this is probably the longest walk we can take…especially with the humidity of the summer coming…Milo was really dragging at the end.

Milo and I decided to check out the Cherry Blossom Kite Festival at the Washington Monument. You can check out the map of our walk here.

It was overcast that day, but we sat at the monument, had a picnic lunch, and watched the kites. At one point there were definitely more than one hundred flying at the same time! 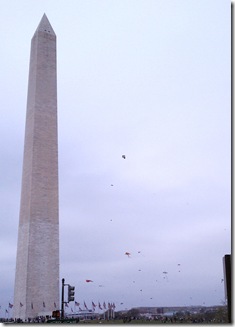 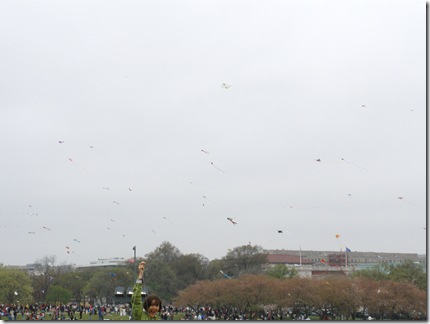 Milo didn’t get as excited about all the kites as he has about individual kites on the Mall in the past…but then he saw a kite that looked like a plane! (And made noise too) 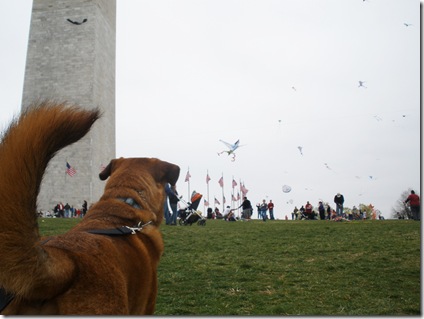 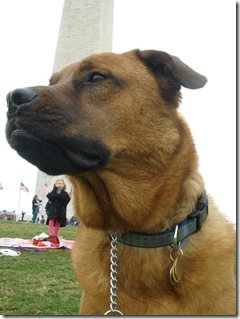 I had the day off on this past Friday so Milo and I decided to try to catch the $1 instant lunch deals that Living Social was offering. It was a great deal…such great deal that all the places I wanted to try were packed. At one point I decided on a place…and I thought I bought the deal and waited in line…turns out my purchase hadn’t gone through. At this point Milo had been waiting patiently for me outside and they were telling people that the food was a 15 minute wait. So instead of waiting in another line…I just got some hot dogs from a local street vendor and we headed to the Capitol to have a picnic. The walk was recorded in Runkeeper in 2 parts: pre-picnic and post-picnic.

On our way to the Capitol lawn I had to take pictures of the pretty tulips growing all over the Capitol grounds. They were soooo pretty! 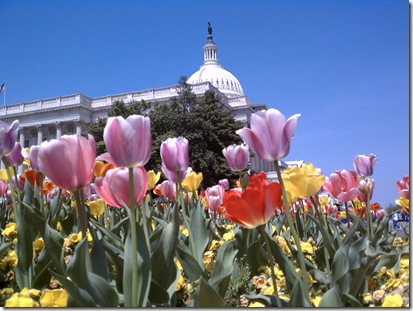 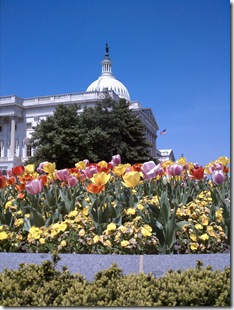 After picnicking and relaxing on the lawn for a bit, we walked down some of The Mall and then back up to the Capitol. The leaves on the trees are coming in and they make everything look so pretty! 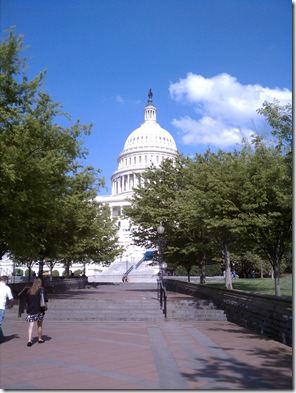 On our way home we stopped at one of Milo’s favorite parks to find that his beloved fountain had water in it! He LOVES playing in these fountains and was so excited to see the water! (As a note…he is not the only dog that goes in those fountains…I saw other dogs do this plenty before I let him 2 summers ago). 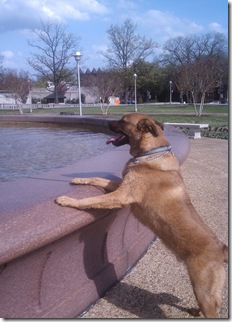 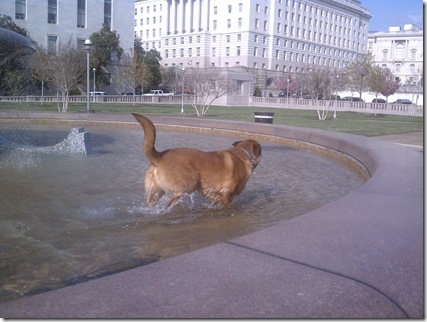 We have really been loving walking around DC! I’m hoping that Milo (and I) can manage the long walks in the hot/humid DC summers. Even when the temperature goes up by 10 degrees he gets tired WAY faster. We usually find a good spot to sit down and take a break. But even now in the cooler weather, each long walk ends like this: 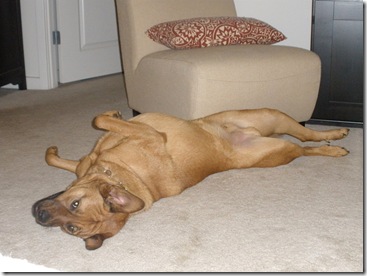 (Sometimes I look like this afterward too…especially after the 8.5 miles)
Posted by Laura at 3:00 PM