My Sunday was…interesting…to say the least. All I had planed for this past Sunday was a manicure/pedicure at Revo Nail Salon up on the north side of DC. Not just any mani/pedi…I had a LivingSocial deal for a paraffin (wax dip) mani/pedi for only $25!! Now I don’t get pedicures that often…so I was super excited! Since it was going to be a nice relaxing day…I took the opportunity to sleep in that morning.

Around 10am I awoke to the sound of my Gmail IM…my sister was messaging me to tell me that my account was sending out spam! As I was processing her message I noticed that my inbox was FULL of messages to emails that were undeliverable…all spam. They kept coming in! And I noticed my sent box full of successful emails to friends, family, old friends, old possible roommate contacts, old teachers and bosses…and they kept going out! Someone or something was IN my account doing this! They weren’t even all the same message…it was changing the message and subject to each person! So freaky!!

I immediately changed my password and started trying to send out apology emails to the first ones on the sent list…but they still seemed to be going out! Well after about 10 minutes…my email automatically logged me out and had me word validate when I was logging back in…that seemed to get the other thing out of my email…and the bleeding stopped…phew! I sent a few more apology emails but there were literally HUNDREDS to send…and my sister mentioned that it was pretty obvious spam and that people would probably assume what had happened. So here is my large apology…if you got a weird email from me…I’m sorry!

I was a bit bummed by the email problem but it was BEAUTIFUL out…so I took the dog to the park before I had to leave for my relaxing mani/pedi. We had a great time at the park, we came home, and I got on the metro to head up the red line to the salon.

I got there just in time for my 2pm appointment. I walked in, mentioned that I had an appointment…and they told me they had no record of it. Upon checking my call history…I realize I had accidentally called the OTHER location…which was not up on the red line…but the green line! Instant return of the non-relaxing Sunday! I quickly called them to see if I could change my appointment to later that day (the location I was at was all booked up!). Luckily they let me move it back 1 hour…so I started to walk back to the metro…this is what I thought I would have to do: 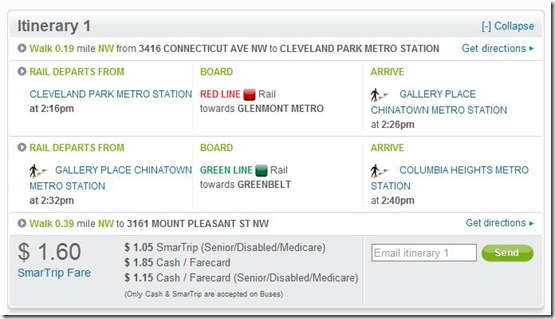 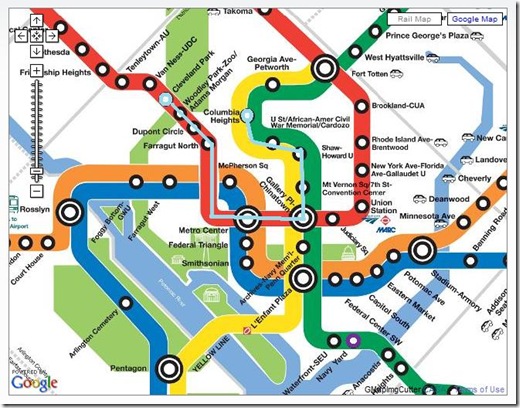 The trip I thought I’d have to take in itinerary form…and on the map (highlighted in light blue).
But then…it hit me! I took out my phone and used the GPS to figure out that really the two salons were a walkable 1.5 miles apart! And then…it hit me again! Capitol Bikeshare! I turned around again and realized that half a block down there was a bike station…and then looking at the map I realized there was a stop one and a half blocks from the other salon!

I had my phone navigate me first to find the salon…then the bike station. The entire trip took me exactly 29 minutes and 40 seconds….which means (besides my subscription to Capitol Bikeshare) getting to the salon cost me $0.00 :-). I would have done it faster if I didn’t stop so often to double check my map….and then took a bit of time to walk up a steep hill.

Of course to keep the day interesting…it started to rain during my ride of course…but luckily it was just a short shower! It passed really quickly.

I know that biking isn’t exactly what you would call relaxing…especially with how hot DC has become in the late spring. But I was just so excited to get to use Capitol Bikeshare to save time, money, and miles!
It would have cost me $1.60, 12-15 min of walking plus 24 minutes of metro riding, and riding all the way into and then back out of the center of the city. Instead I spent $0.00, 29-33 minutes biking/walking, and only went about 1.5 miles! :-).

Honestly…I have really enjoyed my Capitol Bikeshare membership so far…but I think that trip really made my day! And I think it was the most helpful trip since I’ve been a member. Being able to casually hop on a bike to quickly get between spots in the city…to remedy an appointment mistake! I loved it!

My manicure afterward was pretty relaxing in the end…and then I got to take the dog to his other favorite park that evening which is always fun! So while it did have its ups and downs…I think Sunday turned out pretty good…
Posted by Laura at 11:54 PM