Welcome to Monday Memories! I really love seeing old photos or home videos of friends and getting to see what people looked like when they were young or hearing about the fun memories that go along with great photos. Sometimes home videos or personal photos are just plain funny! Each Monday I will share a old photo or video that goes along with a personal memory! Click {here} to see past Monday Memories!

Yesterday my parents, my sister Leslie, and I watched the Women’s World Cup final between the USA and Japan. It was quite the heartbreaker as the US gave up the lead twice and lost in a messy shootout after 30 minutes of overtime.

I felt odd when I realized that the Women’s World Cup was on this summer. I don’t know why I had forgotten…it is always one year after the men…but this year it didn’t seem very hyped up :-/.

I always find it really unfortunate that people don’t pay more attention to women’s sports…especially in terms of USA’s Women’s Soccer. Firstly…watching women’s soccer definitely has a different feeling than men’s….you still get a lot of the sliding and action on the ball…but there aren’t NEARLY as many “drama queens” in terms of trying to get a penalty out of a tackle. Secondly…our women’s soccer team DOMINATES compared to the men’s team…we are almost always in the final games of the Olympic Medal Matches or in the World Cup. The men’s team rarely makes it past the group rounds…

A few years ago…women’s soccer was really gaining a lot of momentum in popularity. I would have never imagined it would have sort of fallen back under the radar so quickly…

In 1999, I was 14, and the US was hosting the Women’s World Cup! The opening ceremonies and first two matches were being held at the Meadowlands (Giant’s Stadium) which just so happens to be about 40 minutes away from my home in NJ! Now…my whole family was very into soccer. My sisters and I all were serious soccer players playing in sometimes 3 leagues a year! We HAD to go!

We had a whole group from town (and some relatives) join and we did a big tailgate outside the stadium and then went in with a sold out crowd to watch the US play Denmark in the opening match! Of course we had to decorate the van! 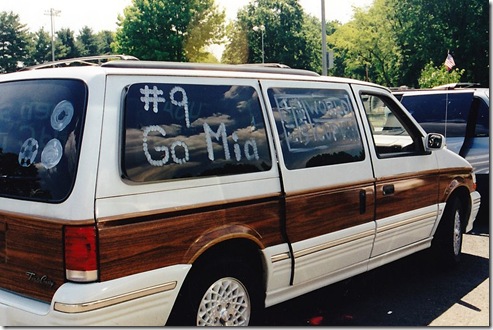 During the tailgate we played some soccer…some whiffle ball…ate lunch and just got really excited to watch the game! There were tons of other people doing the same and we had a great time! But I remember it being really HOT!

My whole family were huge Mia Hamm fans…she was (and still is) my ultimate sports hero. We all had her jersey and we were so excited that we were going to see her play! The first picture is my mom and my sister Leslie (age 12)…the second is Leslie and I… 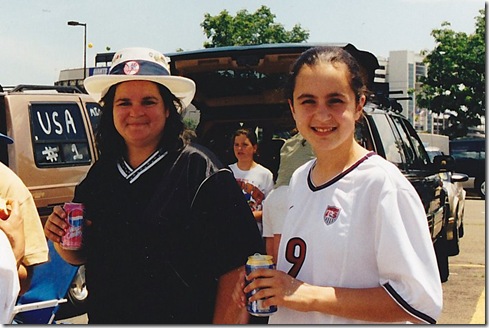 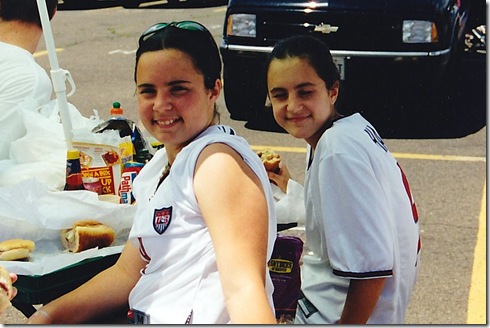 The US won that match 3-0 with the first goal being scored by Mia!!! They eventually went on to win the World Cup Title!

I remember knowing almost all of the players back then…Hamm, Foudy, Lilly, Akers, Parlow, Chastain, Fawcett, Milbrett, Scurry! Nowadays I only really know O’Reilly and Wambach. I think both my own attention and the media coverage is to blame. I know I haven’t paid as much attention in recent years…but the media doesn’t cover it nearly as much anymore. In 1999, the Women’s World Cup aired on ABC….this year…on ESPN2. I’m also definitely not the only one who feels that way about “knowing” the current team and what is going on with their international games. The team from the 90’s were fast becoming household names and were all awesome women athletic icons. And if you knew them or not…I think most people would recall the winning shootout goal from 1999…(don’t even get me started on the critics of that event…I personally loved her passion!) That final in 1999 set a record for attendance of a women’s sporting event…and it makes me sad to think that an attendance record from 12 years ago still stands.

I am going to make an effort to keep up again with USA Women’s Soccer. They are a great team to watch and it was so fun watching them yesterday despite the loss. Plus, it is a great time to keep an eye on them since the Summer Olympics are only a short year away!!

The reason I know of O’Reilly despite my recent poor attention to the team…she is from my county in NJ! In fact…we were both awarded the same award the same year (2003 - she was my class year in school)! In our county…each high school named a male and female student athlete senior to represent their town and receive the Greater Middlesex Student Athlete Award. I was the female named from my school that year and Heather O’Reilly was the female from her school. She had just recently been called up to Team USA at the time…so it was really cool to sort of get the same award as her and be at the same dinner!