Happy Monday!! Today kicks off my weeklong series of posts dedicated to previewing what I will be watching as the Fall 2011 TV season gets underway! Monday is actually usually a pretty slow night for me but I do actually have an addition to my Monday lineup this year! Here is what my TV schedule looks like on Monday nights! 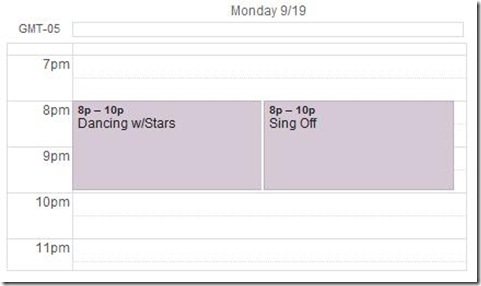 I got into Dancing with the Stars a few years back. I actually resisted watching this show in the early seasons. But a few years ago, after falling in love with the summer show So You Think You Can Dance and missing watching some dancing in the fall, I decided to give this a try. Plus my parents really love the show and it is fun to talk to them about it! I understand those who think its kind of a silly show…but I really like the routines that the talented professionals put together and its also pretty entertaining to watch the celebrities improve over the weeks...I usually find myself rooting for a celebrity I didn’t expect to like at first or maybe even one who I didn’t know before the show.

I also really like how they highlight really talented dancers during the results show. They always have dancers performing during a musical guest, they have young dancers come to showcase their talents, and they have “stars of dance” in various genres perform each week. I find dance entertaining so I find this show entertaining…but I can understand why people might not enjoy it.

I have to say this seasons cast of DWTS I personally think is pretty decent. I know some of the more conservative audience are a bit upset about Chaz Bono dancing saying this should be a family show…and all I have to say to that is…unless you tell your child that Chaz Bono is transgendered, I’m pretty sure there really is no reason any young child would assume otherwise. I also think it is a good life lesson to be respectful of people and treat them like regular people. However you feel about what Chaz decided for himself…it doesn’t effect anyone else…so let’s respect his decision and just let him dance! (Ok that is all I have to say about that!)

Here are this season’s cast for Dancing With The Stars:(Not sure the video works for those who use Google Reader…you may have to click through)

And one of my favorites Daily Grace reviews the cast…

This year I *think* I’m going to be rooting for Hope Solo…but a lot of times I need to see the first few episodes of the show before I really pick someone to root for. In shows like this I usually just find myself naturally rooting for someone…so I will let everyone know who I’m rooting for when I update about the shows I’m sticking with in a few weeks!

While this show isn’t a new series for me, it is new to the regular season TV schedule. Normally this The Sing Off is aired during the winter midseason break. This year they are having a full fall season.

The Sing Off is basically real life Glee…but a bit more intense…everything is sung a cappella! I am so impressed by good a cappella groups…the way they can make the percussion sounds on top of singing every melody and harmony. Sometimes its hard to believe there are no instruments. I find it so impressive and fun to watch so I decided I want to tune in for the fall season. I actually don’t know much about the groups performing…but I can’t wait to watch! Here is a preview:

Since each of these shows are 2 hour blocks, I don’t really have much room to add shows to the Monday night schedule. There really isn’t anything in the 10pm timeslot that I’m interested in. I thought about watching the new sitcom 2 Broke Girls…but it seems like it could cross the comedy border into being too cheesy for my personal tastes. On the other hand, EW picked it as one of their Top 5 new series…if anyone tries it out and finds they like it feel free to comment! It premieres September 19th at 9:30pm-10:00pm on CBS.

What shows will you be watching Mondays? Do you know who you are rooting for on DWTS? Let me know in the comments! And come back tomorrow to find out What I’m Watching Tuesdays!