The weekend is pretty slow for TV…except Sundays! So I decided I’m going to lump Fridays and Saturdays together with Sunday. So let’s check out what is in store for the DVR over the weekend!

Fridays on TV are all about trying out new shows. I get sort of nervous for shows slated for Fridays because they don’t really have a great chance to get good ratings since most people go out instead of watching TV…I always wonder if they take DVRs into consideration nowadays…anyway here is what my Friday lineup looks like… 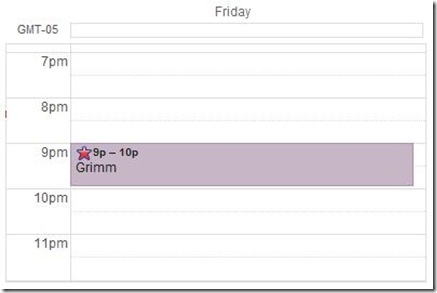 Grimm doesn’t premiere for a while…but the concept sounds kind of interesting. The show is about a cop who finds out he descends from a line of hunters known as Grimms who are able to see fairy-tale supernatural creatures through their everyday disguises. I agree it sounds a little crazy…sort of like some cop drama mixed with fairy tales? Maybe with a bit of a Buffy tone? I decided it was just crazy enough to try out…although it does look a bit scary!!! But with a completely open Friday night…what's the harm? Unfortunately it doesn’t premiere until late October…so Friday nights will be “catch up on the DVR” night for me for a while. Check out the thriller like preview for Grimm…

There really isn’t any prime time TV on for Saturday nights…but there is on old favorite…SNL!! I enjoy watching SNL…its usually hit or miss and I don’t think it will ever go back to my favorite time in the mid 90s with Will Ferrell, Cherri Oteri, Molly Shannon, etc…or even the era of Tina Fey and Amy Poehler. But I have to say I really like Kristen Wiig. I think a lot of people get tired of her playing a “weirdo” but I personally think that maybe they don’t notice how many other skits she does. I personally think she is really funny and really talented and one of the highlights of the show for me. I’m not sure who they are adding to the cast this year (if they are at all)…but I’m excited for it to come back. The season premiere is Saturday 9/24 at 11:30pm on NBC. Alec Baldwin will be hosting for the 16th time…which will give him the record for “most frequent host.” Currently he shares that title with Steve Martin at 15.

Sunday is my big weekend night of TV…filled with both old favorites and new shows! Check out the Sunday schedule below! 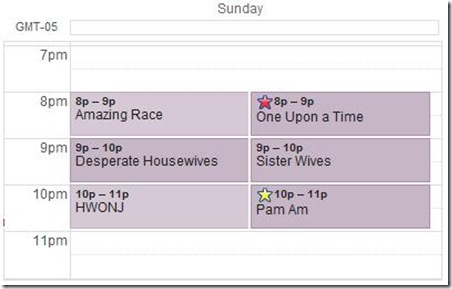 If there is one reality show out there that I’d LOVE to be on it is The Amazing Race!! (Although I highly doubt I’m fit enough for it!)…This is one really great show. It takes teams of two in a race around the world. Each leg of the race there are challenges (both physical and mental) that have to do with the culture of the country they are racing through. The last team to finish each leg of the race is eliminated until there are only 3 teams left racing to the finish. I find this show so cool to see all the places they go and the challenges they have to complete. Its just a really great competition…one of my absolute favorites. Here is a look at the teams competing this season…

Once Upon A Time is another late-comer to the Fall season starting late October…and similar to Grimm it looks like it could be pretty weird…but I think there is a really interesting concept. Characters from fairytales are trapped in a modern day town with no recollection of their fairy tale past…I’m not quite sure what the goings on will be but I think it really could be interesting….or just be major overkill. But I really like Ginnifer Goodwin so I think this show has some potential…check out the preview below!

Desperate Housewives is heading into its 8th and final season. I have to agree it is time for the show to gracefully depart. I really enjoyed Desperate back when it started but in the last few years it has gotten really nutty. I personally still enjoy it because I have grown to like certain characters…but I think it has passed its prime. We have a whole season to say goodbye to Wisteria Lane...and I’m hoping a lot of closure happens. I think it will be kind of a weird goodbye after so many years…but its definitely time. If you have never watched Desperate before I don’t think it is worth tuning in…but if you have…what do you think of the series now? The preview for the final season takes a look back at the past…and in a way you can kind of see how much crazier it gets…

I have really enjoyed the first two seasons of Sister Wives and I am excited for the upcoming installment. This is a reality show documenting the lives of Kody, his 4 wives (he is only married to the first wife legally), and all their children. I think this might be turning into a 1 hour show this year  but I’m not sure…the last few seasons it has only been half hour…but the seasons were also pretty short. Here is an ORINGIAL trailer from the series so you can get an idea…the first season focused on bringing 4th wife Robyn into the family…

During the last season, due to coming out in the open as polygamists on the in the first season, the family was forced to move out of state and out of their home they all shared into 4 separate (but close) houses. Coming up in the third season, Kody’s newest wife Robyn, is pregnant with their first child together. It really is fascinating to watch this family. I think they can be a bit hard to relate to in the romantic relationship part…but easy to relate to as a family who loves each other. I find myself rooting for them. They don’t seem to be the sort of colt type polygamists we can see on news stories marrying off girls at a young age to an elder who has 15 wives….this is a modern family dealing with modern issues…on top of the issues of being polygamists. I think this is a cool show…and I would recommend it…just for the sake of starting up interesting conversations. Below is the season 3 preview…

The Real Housewives of New Jersey season is actually probably pretty close to being over (it started in early summer) but I think there are a few more episodes so I needed to include it in the scheduling. I really watch the NJ Housewives because I’m from New Jersey…I know its sort of a crazy show…but I think its funny and entertaining. I’m not even sure how it stacks up to the other Real Housewives shows because I only watch this one. If you are into this sort of reality TV…I like how intertwined all of these housewives are…and I have enjoyed this season how no one is really the REAL villain…(although Teresa has her moments) but I think everyone has looked both good and bad throughout the season and I like that dynamic. But in a few weeks this will be out of my Sunday lineup again until next summer!

I am actually really excited about the new series Pan Am…I’ve been missing a good dose of a time period piece show…and I think Pan Am will fit the bill nicely. It will be interesting to see what story lines they come up with for the women flying all over the world. I feel like I haven’t seen Christina Ricci since Casper and Now and Then (if I recall correctly…she got to kiss Devon Sawa in both of those films…my 12 year old self is SUPER JELOUS)…and I think she seems to have the perfect face for this show. Something about the preview tells me I’m really gonna like it…but I guess we shall see…do you think you will be watching Pan Am???

So there you have it…everything I plan on checking out during the Fall 2011 Season Premieres! I’m so ready for it all to start! Looking at the amount of shows it can seem a bit daunting…but many of those shows will be cut out of my schedule in a few weeks. I plan on doing an update later this season to tell you guys what I wound up sticking with! I hope you have enjoyed the last week of What I’m Watching…if you missed it check out Monday, Tuesday, Wednesday and Thursday! And don’t forget to let me know what shows you will be watching (or did watch and liked/disliked) in the comments!