Thursdays are another busy day for the DVR but largely full of shows that are old favorites for me. I actually only have one new show that I was am going to try on Thursdays…but we will get into that when I talk details…here is what Thursday has in store this fall… 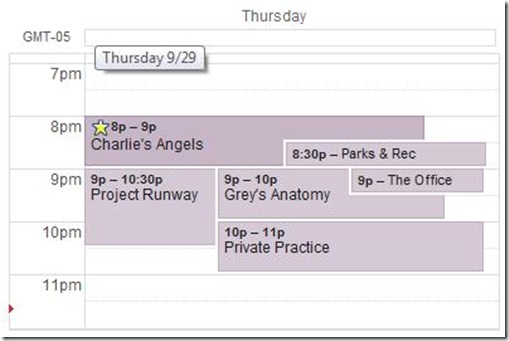 I wasn’t sure I was going to add Charlie’s Angels to my list of shows to try…but when I was making my original schedule and saw an opening…I decided to throw it in there and try it out. I think it really has the potential to be good or cheesy…but in the past few years ABC hasn’t been too shabby with programming so I’m gonna go into this thinking positive! I wasn’t around when the original Charlie’s Angels was airing…so I might actually have a better shot of liking this remake (not having any bias for the old version). I also think my TV lineup could use a little more action…and I like Mila Kunis….I think this has some potential. Let’s check out the preview:

I’m really excited for Parks & Recreation to come back. I have loved Amy Poehler since she was on SNL and I was pleasantly surprised as Parks & Rec grew that she didn’t just play another crazy and inappropriate boss like Michael on The Office. Poehler gives her character Leslie Knope space to be a bit kooky…but she really is smart, loyal, has a big heart and good ideas and doesn’t always do the dumbest thing possible. The other characters in the show are great too…and the anarchist who is a boss in the government, Ron, has become a bit of a cult fan favorite! This season…I’m crossing my fingers for Leslie to finally have some luck in love! I’d recommend checking out Parks & Rec, especially if you assumed its just another version of The Office…while it is a bit of a mockumentary as well…it definitely has a different feel. Check out the preview for this season below!

Grey’s Anatomy is a long time favorite for me. I have loved this show since its beginning in the spring of 2005. If you like medical dramas…this one is definitely for you but considering it’s a drama…if you haven’t watched in the past…I’d recommend starting from the beginning. I think Grey’s is starting to show its age the past season or so (it is now starting up season 8)…cast members have come and gone…storylines are getting stretched thin or going a LITTLE crazy…but being someone who has watched from the beginning…I am still a fan and will watch until it ends…but I still think it’s one worth watching (from the start)…it really is a good drama. Check out what is coming up this season:

I actually didn’t start watching The Office when it first began. I tried it out and sort of didn’t get as hooked as other people. But around season 3…I gave it another chance on DVD and saw how much it grew and improved and I have been a fan since. I have to say though that I’m back to being a bit skeptical about it this coming season. It will be hard for the show to go on without Steve Carell at the helm…he was basically the main idea behind the show…the crazy boss…so I’m not going to lie when I say the show could either be great with a new feel orrrrr not very good with a big big void when he is gone this season…I guess we shall see…but now that it has become another old favorite…I don’t see giving it up either way.

The only problem with The Office is that I’m overly booked in its timeslot…but I think I might be able to watch this online…and Project Runway will end at the midseason so it will make it back on to the DVR in no time!

Project Runway started their season a few weeks ago but there are still PLENTY of weeks to go if you want to get in on this show! I have always enjoyed watching Project Runway mainly for watching the cool and creative things the designers come up with…especially with the weird challenges (such as making an outfit from items from a Pet Store). It really is amazing what they come up with. Over the past few seasons, Project Runway has extended its broadcast to 1.5 hours and I have to say that sort of makes it drag a bit for me. I think with this show I’m less interested in the drama and more interested in the pieces that come down the runway in the end…so I sort of wish it didn’t extend its broadcast. Extending into the 10pm timeslot, it doesn’t mess up my schedule too much. I would recommend Project Runway if you appreciate the arts…not as much for the fact of it being a reality competition. I like it for what the talented designers come up with. If that is the reason you are interested in tuning in…you definitely don’t need to watch from the beginning of the season…just jump right in!

Private Practice is a spinoff from Grey’s Anatomy. It is another medical drama but not in the context of a hospital…in the context of a practice of physicians with various specialties. The premise was following Addison Shepard…the ex-wife of one of the main characters on Grey’s Anatomy…as she leaves Seattle Grace Hospital (on Grey’s) to find herself with some old medical school friends and decides to join their practice in California. It has grown to become about the entire cast as opposed to just watching Addison…but that character is the reason I got into it. Private Practice is definitely not as good as Grey’s…and I sort of find it crazy how mix and match the cast is with who is hooking up with who…sort of unrealistic and annoying…but some of the storylines have me hooked…and I really think its fun when Grey’s and Private Practice do “crossovers” so the characters go back and forth between the shows for various issues.

I actually wouldn’t necessarily recommend Private Practice…it’s not that it’s bad…its alright…but if you haven’t gotten into it already I’m not sure its worth going back to watch the past seasons to catch up…there are definitely series that are more worthy of your time. But its not a bad show if you are watching it…I’m personally interested to see where it winds up…and they do bring in interesting cases and issues with patients so that is always entertaining. Here is a preview for the upcoming season:

After much debate…this season I’m skipping out on the new sitcom Whitney on NBC. Besides the fact that I don’t really have room during its timeslot (9:30pm – 10:00 pm)…I saw Whitney host a New Years thing this past year on TV and she really just rubbed me the wrong way. I was considering giving her another chance if I could find room in my lineup…but I don’t. If anyone decides to watch it let me know how it is! If it is really good maybe I’ll give it a chance online.

What will you be watching on Thursdays? Have you stuck with Grey’s or Private Practice? Any thoughts on this season of Project Runway? Let me know in the comments! Tomorrow I’ll be highlighting what I’ll be watching over the weekends (in which Sunday is the biggest day)! And if you missed it be sure to check out what I plan on watching Monday, Tuesday, and Wednesday!