It’s Tuesday!!! My Tuesday TV Schedule is a bit busier for the DVR than Monday…and some of the shows even premiere tonight!!! So lets get right to it! Here is what my Tuesday show lineup looks like! 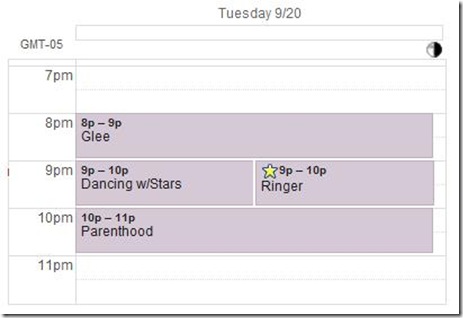 I was a tad late joining the Glee train but I have been a fan now since the second half of the first season. I really love Glee mainly for the music. I have to say I really love their covers. Being a person who participated in the school musical, chorus, and show choir…I really enjoy and appreciate the performances. I think that in terms of storyline…it can get a bit crazy for me. I think the first season was good and I like the issues they dealt with. The second season (story wise not music wise) went downhill. But I really really love the music and watching them perform. The cast are really amazing singers and dancers and I know it from seeing them live! So I can’t wait to see what music they have in store for this coming season! (I’m also excited for the witty one liners from Britney, Emma, and of course Sue!)

The main performance show of Dancing with the Stars is on Monday nights so I talk more about that on the post from yesterday…but I am also looking forward to the results show of DWTS. Of course this is the “drama” night were one celeb gets kicked off the show but I actually really look forward to the performances they have the results night. They often bring stars of dance from different genres, have musical guests, and even sometimes have a kids ballroom competition which is soooo impressive! Last season they showcased kids who are beyond talented dancers while at the same time overcoming hardships…it was really touching and it was wonderful to watch those kids get such a great opportunity. So I’m excited for my second weekly dose of dancing!

Ringer is a brand new series this fall. I am actually a bit apprehensive about it. I haven’t watched a show on The CW since it was the WB! (sigh….Dawson’s Creek)…and I also sometimes haven’t been the biggest fan of Sarah Michelle Gellar (although I can’t fully put my finger on why)…but I am really intrigued by this new series. A woman who has a bit of a rough life happens upon a situation where she thinks her identical twin is dead. Assuming the grass is greener…she takes the opportunity to get out of her life and take over her sister’s life…but is she really dead??? AND…is the grass even greener in the first place??? The potential places for this story to go between possibly getting caught impersonating her sister…how she gets out of her old life…what really happened to the twin…I think I really could enjoy this show. Plus SMG plays both sisters so that is always fun to see if they do that well. To top that off…SMG has been away from TV for so long…something must have been good in the script to draw her back in (I know that’s the hook the network is playing and…ya know what…it’s working!) I could see myself either loving or quickly dropping this show though…but I will be checking out Ringer tonight…will you??

Parenthood was hands down one of my favorite shows the past two seasons. This show has an amazing cast and really deals with a lot of various parenting issues from dealing with your teenage daughter who is unmotivated but talented, to helping your son deal with an absentee father, to how to handle your child finding out that they have Asperger's Syndrome and all the other difficulties that come with that diagnosis. I think it’s a great show with real heart. While there are a few storylines that have gone a bit off the deep end…for the most part I think its trying to show all sorts of issues that come with parenthood in the parent/child and co-parent relationships. It’s sort of the perfect drama complement to the comedy of Modern Family. And to top it off it comes from Ron Howard!! I HIGHLY recommend this show…so much that I’ll give you the old preview from before it even aired…(to be honest I sort of recommend you start from the beginning on DVD)…

In fact these scenes were filmed with a different actress as the mother dealing with her teen daughter…unfortunately Maura Tierney﻿ (ER) got breast cancer and needed to get treatment so Lauren Graham (Gilmore Girls) took over the role. Lauren does an amazing job with the role (I think they would have both been great though). If you have been enjoying Parenthood or you just feel like diving right in…here is the trailer for Season 3 (including a catch-up from last season)…I can’t wait for it to start TONIGHT!!! (SPOILER ALERT…if you want to start from the beginning DON’T WATCH!!)

I decided to pass on the new Tuesday sitcom New Girl. While I really like the main actress (Zooey Deschanel) I can’t really get into the concept. I think the type of kooky girl she is playing will be slightly over the top annoying instead of funny. If anyone decides to watch it and it really is funny let me know! It premieres 9/20 at 9:00 - 9:30pm on FOX.

So what do you plan on watching on Tuesdays this fall? Are you going to be watching Parenthood or Ringer tonight? Let me know! And be sure to check in tomorrow for what I’m watching Wednesday! It’s one of my favorite nights!