I have a confession to make…almost two months ago I signed up for a 5K…and was too nervous about it to blog about it. Not sure why. I was confident I would follow through with the actual race when it came time. I guess I wasn’t confident how I would progress training…I’ve never run that distance before.

To those of you who are runners…I know that a 5K doesn’t sound very daunting. But even when I was in shape in high school and could play almost an entire 90 minute soccer game…I was never good at distance. I always DREADED the 1 mile run day in gym. So signing up for an organized race…longer than 1 mile?? With actual runners?!?! And people watching?!?! I never thought I’d do it.

But when my friend Liz mentioned these easy-going Crystal City 5K Friday races…I thought it would be a great way to get myself motivated to start interval training again. I signed up for a later one to give myself time and I began at the beginning of this training chart…adding a few intervals in order to try to gain the distance. I was doing great! I ran every other day for almost a month. I was really close to getting to a straight run (no intervals) when this happened: 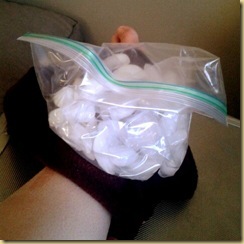 The sprain kept me away from running for almost 3 weeks! To be honest it made me a bit glad I hadn’t written about my training on the blog…I as the healing slowed a bit during week 2 I was wondering if I’d be able to run this thing at all!

Luckily after 3 weeks I was able to run again. I had a bit of trouble starting up…I wanted to push myself to the level I was at when I had stopped and it was hard (and a bit discouraging). But this past Monday…for the first time ever…I ran a complete 5K on the treadmill! The farthest I have ever run non-stop…in my life!

Now, running the distance on the treadmill doesn’t directly translate to doing it outside on race day. The treadmill forces my pace. And if I’ve learned anything from my training…its that I’m not the best at pacing myself.

Anyway the race is TONIGHT! I’m finally letting the blogosphere know! I’m a bit nervous but excited. If you told 16 year old Laura that she’d ever be excited to run in a 5K race…she’d think you were crazy. I think in a way that thought makes me even more excited!

My ultimate goal is to complete the entire 5K without walking. However with my known pacing issues, I think I will still be pleased if I run the first 2 miles before I need a break…and only a short one at that.

I guess we will find out tonight…update to come…