Welcome to a week long series where I profile What I’m Watching this Fall TV season! Mondays last year were pretty slow but I think they have a chance to be a BIT busier this year. Here is how Mondays look at the moment: 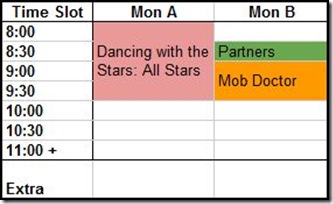 A few things I want to mention about my TV schedule images this year. My DVR has 2 available tuners to record and watch shows. That is why I have an A & B column. Once I have too many shows at one time, I will put them in the “Extra” row and I will detail how I plan on following the show (most likely via full episodes available online). The colors indicate both what network the show is on as well as if it is a new series this year.

So let’s break Monday down:

Dancing with the Stars: All Stars ~ ABC Sept. 24 8:00
Last Fall I watched Dancing with the Stars because I enjoy watching good dancing and Monday was pretty empty anyway. In the Spring for some reason I just couldn’t get into it. But I think I will be watching again this Fall as they are bringing back a lot of favorite celebrities from the past.


To be honest…I’m pretty excited about who they picked for the show. The level of dance should start off high right off the bat. And there are only a couple of stars that I wasn’t a huge fan of from past seasons. I think I’ll be rooting the most for Melissa Rycroft, Shawn Johnson, and Apollo Ohno…but I like a lot of the rest of them too! You can see all the teams {here}. Who will you root for?

Partners ~ CBS Sept. 24 8:30
Partners is a new CBS sitcom about two best friends, one gay and one straight, but they are very close and almost partners in life. Here is a preview from CBS:


I think this show looks like it has a lot of potential being from the creators of Will & Grace. I like the idea behind the friendship story as well. I’m just a little skeptical just because I tend to find CBS’s style of sitcom a bit cheesy. A lot of them (including this one) use laugh tracks which feels a bit out dated to me. But there are a few good shows that use laugh tracks (such as How I Met Your Mother) so this could still be alright. Monday’s are pretty slow for me so this show will get a chance. We will see if it sticks around.

Mob Doctor ~ FOX Sept. 17 9:00
I think this new (medical? crime? combo?) drama from FOX looks interesting. A medical resident owes it big to the Chicago Mob. What will she do when the Mob wants her to off an enemy patient?? What about her oath as a doctor?


Sometimes these type of shows get too bloody or actiony for me. But I think her dilemma sounds interesting. With a pretty empty Monday…I’ll try it out.

What are you watching Mondays? I’ll be back tomorrow with what I’m watching Tuesdays!
Posted by Laura at 8:00 AM