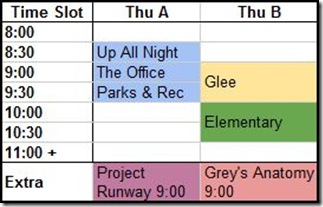 For information on how to read the graphics above, see Monday’s post.

Up All Night ~ NBC Sept. 20 8:30This sitcom about navigating through the very beginning stages of parenthood is heading into its second season. I really liked this sitcom last year…it has funny moments as well as cute/touching moments. I think it touches on a lot of different dilemmas of being new parents. But then again I tend to enjoy Christina Applegate….and Maya Rudolph…and Will Arnett…so this show had an advantage starring all three haha. While the show returns tonight…there isn’t really any new season promo for it…so I’ll just share the main trailer from last year…

I enjoyed this show last year so I plan on keeping it around this year. Its not the best sitcom on TV but it is definitely a pretty good one.

The Office ~ NBC Sept. 20 9:00It’s the final season of The Office. Even though it might not be as good as it used to be…I have to watch to see how it ends!

Parks & Recreation ~ NBC Sept. 20 9:30Although it started off slowly…Parks & Recreation has become one of my other favorite sitcoms! When this show first started I thought the main character Leslie Knopes (Amy Poehler) was going to be an inappropriate and enthusiastic government manager (ie a female Michael Scott a la The Office). But really…while she was a bit over enthusiastic at first…the character has really developed a lot into something with quirks but actually relatively normal. The other characters all have their own lovable quirks as well! It’s a really good show! And this season they are filming a bit in DC! So that’s another reason to watch! (I wish I had caught some filming…I know they have done a bit by the reflecting pool of the Capitol).

Glee ~ FOX Sept. 13 9:00Glee moved to Thursdays this season which causes a bit of conflict at 9:00 for me….but I’ll touch on that in a bit. I like Glee. I think the writing isn’t as good as it was in the beginning (in terms of plot turns not in terms of humor or incorporating music). However I really really enjoy the music performances on Glee. I know its not realistic at all…but I always enjoy the dancing and the performance of the music.

There are a lot of changes coming this season, considering a lot of the club graduated at the end of the season. So I will definitely be tuning in to see what is next for Glee (and…sing along as well)!

Grey’s Anatomy ~ ABC Sept. 27 9:00Alright….I have a bone to pick with Grey’s Anatomy. There are some characters….who have almost died on this show…like 3 times…traumatically. If you I mean… how likely is it that one person will almost die in 1) A ferry boat crash 2) hospital shooting AND 3) a plane crash…..within an 8 year span of their life….and survive them all?!?…let alone have a bunch of their friends die in similar dramatic fashion in that time span….sigh…

I think Grey’s Anatomy is a good show…for the interesting medical situations that arise…but in terms of the tragic events happening to the doctors on a personal level….it has gone a bit too far for me…and the plane crash at the end of last season was the straw that really broke the camel’s back…

Grey’s is a loyalty watch for me…and ABC.go.com will make it easy for me to keep up with it.

Project Runway ~ Lifetime - Premiered in July – 9:00I really like seeing what the designers come up with on Project Runway. Unfortunately I no longer get Lifetime…but I am still able to keep up with Project Runway with full episodes online! I don’t really mind watching Project Runway online because I care more about the end of the episode and seeing the pieces of clothing more than the drama of the reality TV. But I think the designers they bring on are really talented and I think it is cool how differently they each interpret the same challenge. If you want to watch Project Runway you can find full episodes {here}.

Elementary ~ CBS Sept 27 10:00I’m not sure if this new Sherlock Holmes drama will last in my schedule…I can’t really tell from the previews if I will like it or not. But I am intrigued by the twist that Watson is a woman….and that it co-stars Lucy Liu. I like her…and she hasn’t been in anything for a little while. (I kind of wonder sometimes if someone I like doesn’t do a project for a little while if I trust that they had a lot of faith in the script to make them come back haha). But really the show intrigues me so I will give it a chance. But I could also see myself kind of shrugging it off. What do you think of this new take on this new Sherlock Holmes drama?

So…yea I have a lot of shows that air during the 9-10pm hour of prime time…but at the same time one of them I HAVE to watch online…and the other…well I’ll just probably be keeping up with it every once in a while. The DVR won’t be as stressed out on Thursdays as it might first appear!

What will you be watching on Thursday?? I’ll be back tomorrow for one last post about what I’m watching on the weekends!