Wednesday nights won’t be as busy as Tuesdays, but I do have one potential conflict…although I’m not sure either show will last….hey maybe one of the good Tuesday shows will move to Wednesday if that happens! But I’ll get to those shows in a second. Let’s take a look at what Wednesday will look like for me… 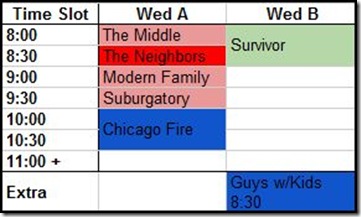 For information on how to read the graphics above, see Monday’s post.

Survivor ~ CBS Sept. 19 8:00
Survivor is one of my annual staples. I really think the social chess game that people play with each other to win this game is quite fascinating. It is also a show that looks very nice in HD (with all the shots of the wildlife haha). This year on Survivor, they are bringing back 3 people who had to leave the game via injury the last time they played…going all the way back to the second season of Survivor (my first and favorite) Australia! I’m excited for these players who were forced to quit for medical reasons come back and give it another try…

I have generally been a bit tired of CBS bringing people back on their reality shows (mixing in with new folks) but I feel like this is a bit different considering these people had to leave their prior seasons prematurely. Survivor starts this Wednesday!! I’m very excited!

The Middle ~ ABC Sept. 26 8:00
I’m sure I mentioned this last year but The Middle is one of my absolute favorite sitcoms on TV right now. It unfortunately gets overshadowed by Modern Family, but this show about an oddball (but very normal) middle class family in middle America is really hysterical. Sue, the dorky and usually invisible but extremely optimistic middle child is my favorite character! Eden Sher is really fantastic in the role. The rest of the cast is great too but I think Patricia Heaton is the other stand out! I think the best overall trailer if you haven’t ever seen the show is the one I showed in last year’s post. The promo for this year is pretty short and sweet…


If you haven’t watched The Middle before, I would highly recommend it. It is a show that is pretty easy to watch without having seen the first 3 seasons…but those seasons are great if you get the chance to catch up! The season premiere is a special full hour episode!!! I really can’t wait for the return of the Hecks!!


********
The next two shows….well I’m not all that confident they will really survive in the schedule. I will have an open time slot at 8:30pm on Wednesday nights (with Happy Endings moving to busy Tuesdays :-/)….and these two shows…well they look like they might be really tacky/cheesy…but they also could have some potential….I’ll explain....

The only reason that The Neighbors made it ON the DVR and the Guys With Kids is in the “Extra” row in my schedule above is because of The Middle’s 1 hour premiere episode. The premiere night, I will be watching The Middle at 8:30 and The Neighbors will be on at 9:00pm for that week only...giving it a chance to be conflict free on my DVR. I will watch the premiere of Guys with Kids online…but if I don’t like either show…neither will remain on my schedule…

The Neighbors ~ ABC Sept. 26 9:00 (Oct. 3 8:30 regular time slot)
In short…this new show about a family moving to the suburbs with alien neighbors looks like it could have its funny moments…but based on the trailer below I’m really skeptical…


It may have a few funny cracks but the show looks like it could get cheesy. But ABC has been putting out sitcoms that I have been enjoying over the past few seasons so I’m going to give this one a chance. We will see if it sticks around…

Guys With Kids ~ NBC Sept. 26 8:30
The promo for Guys with Kids also looks like it could get really cheesy really fast…


I mean….who takes their baby to a bar??? And again with the laugh tracks! I mentioned on Monday that they are not my favorite thing in modern comedies….BUT….it is from funnyman producer Jimmy Fallon…and seems to have a few potential laughs in the trailer…so it will get a chance from me…but it will have to impress me big time to remain in my lineup…


If you aren’t watching this show…you should be! I am counting the days until Season 4!

Suburgatory ~ ABC Oct. 17 9:30
I really thought I wouldn’t keep Suburgatory on my schedule after it premiered last year. It is about a girl and her dad who move from the city to the suburbs…where she feels extremely trapped. During the first few episodes…I thought the portrayal of suburban life was kind of odd…and didn’t really relate to my experience. But there are some pretty funny actors/characters on the show…including a few old SNL favorites…and the main character Tess keeps me interested in her story…it did pick up after a week or so.
There is no new season trailer yet…so here is the main trailer if you want to get the gist of the show’s plot…


Would I call it my favorite sitcom? No…there are plenty ahead of it…but with an open time slot it has grown on me and is entertaining…so I’ll keep it on my schedule.

Chicago Fire ~ NBC Oct. 10 10:00
Ya know…the TV drama department is over saturated with Cop/Criminal/Law and Medical dramas….I kind of find and idea of a Firehouse drama refreshing….it could be a good to see what different types of situations they deal with or what types of characters they come up with for the firemen/women or even their significant others and families…

What will you be watching Wednesday nights??? I’ll be back tomorrow a BUSY Thursday night lineup!!
Posted by Laura at 8:00 AM