Whoops…I did it again…I took another unannounced (ie unexpected) blogging break! Believe me, I have plenty of ideas. The truth of the matter is I am just more and more frustrated with my laptop and have been avoiding it big time. I briefly mentioned this in my birthday post, but my laptop is…well let’s just say…it’s on its last leg. It’s fan is VERY loud and annoying. It gets really hot on my lap…I am attached to the wall because the battery lasts less than an hour when full…and well…then there is this: 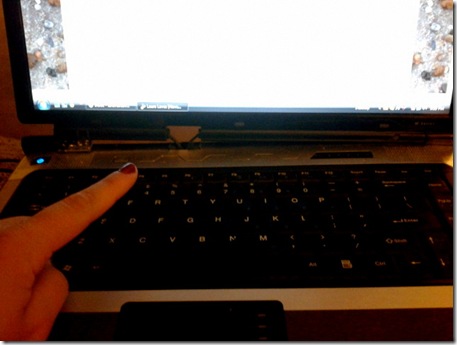 The weird thing is…I have no idea how it broke. One day a while back it just made this weird loud click as I opened it…and it was all out of whack…and then just kept getting worse and worse.

And yes…I do have a desktop I could type on…but I find it much more relaxing after work to hang on the couch and catch up on TV as I blog.  I sit at a desk in front of a desktop for a majority of my work day so I prefer the couch at night haha. Anyway I will be fixing this soon. Hopefully that will inspire more frequent blog posts.

But for now it’s time for Laura Loves!

November!I have to just say that I love the month of November! The air is crisp! The leaves are falling! The month starts with my birthday and ends with my favorite holiday (and some of my favorite foods)! And before the month is out I get to continue my new tradition of rushing back to my apartment Sunday morning and setting up my Christmas Tree to get me motivated for the season! I just love everything about November except for maybe the clocks falling back and it getting so dark. That is alright November, you bring me enough other fun and goodness that I forgive you for the early sunset!

This is our JamMy friend Liz pointed me toward the fun blog called This is our Jam. It is a music blog run by a few friends where they post new music they have recently discovered and enjoyed! So far I have found 3 new artists that I really enjoy by following this blog in the past two weeks! They even make playlists for various occasions…I love checking in with this blog when I’m on the hunt for something new and different to listen to! Enjoy!

NY&Co Nail Polish – MillionaireI was out shopping with Shirin two weeks ago when I spotted this Nail Polish at NY&Co…I couldn’t resist.

The color is called Millionaire. I promptly put it on my nails that night and I absolutely loved the color! It is a metallic gold but it isn’t too yellow-y if that makes sense. It is such a nice fall/holiday color and even though I’ve already repainted my nails red (because I after over a week it was finally chipping!) I redid Millionaire as an accent on my ring finger. If you are looking for a nice gold holiday polish…I’d highly recommend it!

Gay Men Will Marry Your GirlfriendsA friend recently shared this funny video on Facebook and I love it! It is pretty much a slam dunk argument for supporting gay marriage! I had to share! But be warned there are some (just a few) choice words and a little sexual suggestion…kids should probably have earmuffs on!

Football!This fall I decided I was going to make an effort to pay more attention to watching football. Growing up, we were more of a baseball family than football family. I have some parts of my family who are Giants fans…some who are Steelers fans…and my immediate family would just watch football casually. On top of that I went to an undergrad school that didn’t even have a football team! So this year (kind of randomly) I decided I wanted to watch as many South Carolina Gamecock games (my grad school) as I could get on TV up here in DC, and I also figured I’d start watching a little bit of pro football.

It turns out…I didn’t need to put that much “effort” into it at all. I have been REALLY getting into football! I can’t get enough! Specifically (and I apologize to 1/2 of my family) I’ve been paying a lot of attention to and rooting for the Redskins (and RG3 but I will get to that in another post). But football in general has captured me. Even when there isn’t a Gamecock or Redskins game on I’ve been finding other matchups that I want to watch. I love it!

That’s all I have for November! Check back at the end of the year for the last Laura Loves of 2012!

ALREADY! That was a quick year! The years just go by faster and faster! I have this theory that it always feels that way because one year keeps becoming a smaller and smaller portion of the length of time you have been alive. To a 5 year old, a year feels like forever…and it should…it is 1/5th (20%) of their life! But to a 28 year old, a year is a mere 1/28th (3.6%) of the time they have been alive. The percentage just gets smaller and smaller…hence a year feels faster and faster.

Anyway…two years ago I started the tradition of asking myself a few annual questions on my birthday as sort of a reflection of the past year and thinking about what I’d like to make of the coming year. I thought it was a good exercise so I want to keep it up!

Did you accomplish your goals from last year?

Other than those things above I think it is actually going to be a pretty low key year…at least at this point.

How are you celebrating your birthday this year?This year I’m not doing much for my birthday. My birthday is on a Monday and I have a pretty long/busy day on Tuesday. But I did some baking Sunday to enjoy treats this week! I made an apple pie because my apples from apple picking this fall were about to go bad. I also made a butter recipe bunt cake because it is my family’s birthday tradition. So let’s just say I will get back to working on that weight loss goal next week! 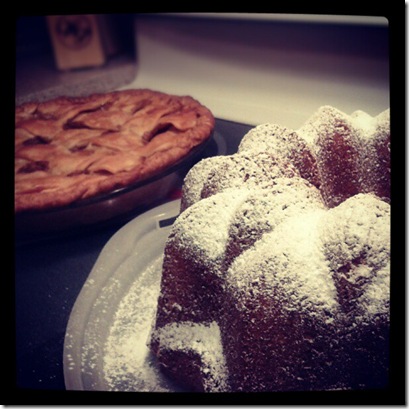