It came earlier than ever this year…all the way back in mid-December…THE list! EW’s 25 Movies To See Before Oscar Night! 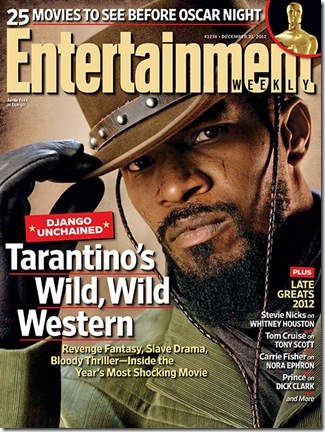 I was so busy getting ready for the holidays that I decided to wait until the usual time – early January – to announce the beginning of Mission Oscar Snob - 2013! But don’t worry, even though I haven’t written about it, I HAVE been heading out to the theater to get a few films under my belt so my first movie post should be coming soon!

But first I need to give the low down of “The Mission!” This is the third year I will make it my personal mission to become a true “Oscar Snob” by attempting to see as many movies on EW’s list as possible. The list comes out before nominations, so once the Oscar Nominations are announced, I may add a few to the list…or possibly lower the priority on some of those on the list. The main goal is to have true opinions on who I want to win when the big award show airs! To be honest I have enjoyed the Oscars so much more ever since I started doing this mission!

You can follow along with my mission using a link at the top of the page! The list will be posted there. As I see a movie I will cross it out with the date. Once I blog about it, the name of the movie will link to the post where I reviewed it! And PLEASE share comments on your opinions of the films you saw…sharing in Oscar Snobbery with others is the best part!

I realized that tomorrow morning is already the big Oscar Nomination announcement…bright and early at 8am EST! Many of you may already know who is nominated by the time you see this post…but I wanted to try to at least get this post up before the announcement! There may be some more personal additions to the list sometime Thursday evening! (And also after the Golden Globes this weekend)…