Here we go! My first review post of Mission Oscar Snob 2013! Since the list was published, I’ve managed to check 4 movies off; Les Misèrables, Lincoln, Wreck It Ralph, and Rust and Bone. Here are my thoughts: 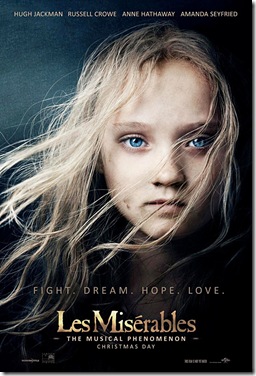 I think Les Misèrables was my most anticipated movie of the Fall/Holiday/Oscar movie season. I absolutely love the stage play of Les Misèrables and so I was very excited to see it come to life on film. It did not disappoint! The acting was great. The music was beautiful. The singing…I’ll give that a solid great. Most were excellent singers, a few were really good…and I know everyone is hating on Russel Crowe’s voice for Javert…but I actually thought he did a fine job. He wasn’t the strongest singer but he really wasn’t as terrible as some critics are saying (and I can be voice picky). There was talk about Anne Hathaway’s performance being Oscar worthy…and if you know a thing or two about her character…I was thinking “Wow…she is really only in the beginning…could she really have made that big of an impact?”…YES!! Her performance of “I Dreamed a Dream” was amazing…I know it is still early in the Mission but she is my current favorite for Best Supporting Actress!

One thing to note about the filming of Les Mis…this was the first musical that they had shot while recording the singing on set. In other words, they didn’t record the music in the studio first and then lip sync to their playback…they recorded as they acted. I think this did wonders for the acting for a story that is told mostly in song. You can watch a little featurette about how they did it {here}.

I absolutely loved Les Mis! It gets a solid 5 stars from me! 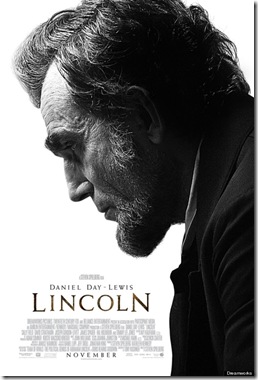 I also saw Lincoln right after Christmas (a double header with Les Mis actually). This movie fascinated me! It tells the story about how Lincoln pushed for the 13th Amendment including all the strategy to get the votes and the reasoning behind the timing and pushback as well. It really told a story of our history and Lincoln that I didn’t really know and it made me way more interested in looking into it myself!

Daniel Day-Lewis was amazing! Even though we weren’t alive when Lincoln was around…I can’t imagine Lincoln done any better or in any other way. And to be honest I forgot what Daniel Day-Lewis even really looks or acts like! He totally fell fully into this role and it was awesome! Again, I know its early, but I think he has my vote for Best Actor. Tommy Lee Jones was also really great but I’m not as ready to call him Best Supporting QUITE yet (want to get a few more films under my belt). One of my favorites, Sally Field, also got a nomination here…but like I said above…I am swooning over Anne in Les Mis.

I have to admit that in my mind there is already a tight race for Best Picture! And I haven’t even seen half of the nominated films yet! I highly recommend Lincoln! It also gets 5 stars! 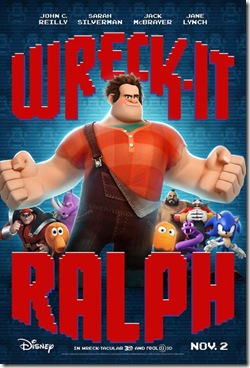 I was lucky enough to catch Wreck-It Ralph at a theater near me last weekend! It was almost out of theaters so I’m glad I managed to catch it! What a cute movie! I have to admit I kind of thought the plot sounded pretty straightforward…a video game villain doesn’t want to be bad anymore. I figured he’d go off and do something good an everyone would love him…yada yada yada. But while that is the overall premise of the film, the movie had more twists than that. I really enjoyed where the plot went and the details of the twists and turns. I think the message was cute, the characters were great, the jokes were good, and the plot was well contrived. I really liked it a lot! It gets 4 stars from me! We will see how it stacks up against other animated films as I get further along in the mission! 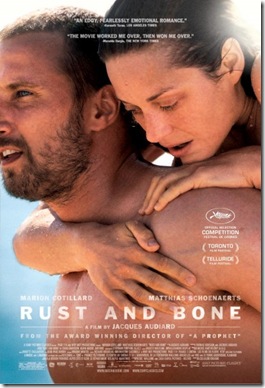 I caught the foreign film Rust and Bone at a beautiful new theater out in Virginia…the kind of new fancy theater with gourmet snacks…and where you feel kind of bad having shown up in jeans and a sweatshirt on a Sunday morning. (Yes I’m writing about the theater because I don’t really have much to say about this film). Something about this movie about an Orca trainer who loses her legs in an accident and falls in love with a guy who turns to street fighting for money…just didn’t connect for me. I wonder if maybe some things just didn’t translate well? I don’t want to give much away (if people do want to see it) but for me their relationship didn’t really make total sense. It seemed odd how they became friends…it was clear she liked him and he cared about her…but the entire time its confusing as to whether all the feelings are mutual…there are things about the plot that felt unnecessary to me…and then end just sort of…well…happens. To be honest, I don’t understand at all why it was even called “Rust and Bone.” Oh well…it turns out this week it didn’t wind up getting any nominations so I’d recommend waiting for this one on video if you are really curious. I give it 2 stars…it wasn’t the worst movie ever…but I wasn’t that particularly impressed…

That’s all for my first movie post of 2013! If you missed Oscar Nominations you can watch them here! You can also see the full list of nominations here! And I update my page above as I see movies so you can always keep up with the Mission there! Have you seen any of the movies I mentioned today? What did you think? Let me know in the comments below!