I loved watching the Oscars this past weekend at the end of my “Mission Oscar Snob.” The show was pretty good this year…although the jokes they made about Tina & Amy being the best hosts were true…they are pretty awesome…there were a lot of musical numbers which I actually liked…but I could understand why some people would think it was too much. But I think one of my favorite things about the Oscars was Jennifer Lawrence at her post show press conference! A lot of people have been watching a chopped up summary version of the interview but CNN has the whole thing without cutting and I think it is much better! She is just so funny and down to earth an I hope that the industry doesn’t ever take that away from her!

I came across this website via (Smart Pretty & Awkward) and it is just a fun way to waste a few minutes on the web…endless “Would You Rather” questions which also show you what percentage of people agree with your choice! Enjoy by yourself or with friends!

Should is a Dirty Word

Michelle Akin is a YouTube personality that used to publish videos with one of my absolute favorite vloggers (Grace). She also used to do more comedy and singing (she has a really great voice) but has transitioned into life coaching. I found her video about how “Should is a Dirty Word” really interesting. A good way to examine the way we talk to ourselves sometimes. I really liked the video so I thought I’d share!

This is apparently a month of videos I love because I have one more for you! I think it is pretty widely known that English Bulldogs have a tendency to enjoy board sports like surfing and skateboarding…but this particular bulldog does it better than any I’ve seen...well the skateboarding at least (at the end of the video)…if you just want to see his impressive skateboarding skills…jump to 1:27….but I think the entire video is entertaining! Thanks to Jacki for finding this one!

I saved the best for last! Big news this month everyone! Remember that old beat up, loud, overheated, and falling apart laptop in this post??? Well I finally replaced it! I had been waiting for the Surface Pro to come out to replace my laptop before Microsoft even developed it. I think it was over 2 years ago when I was telling my sister that I won’t replace my laptop with a tablet until they make a tablet that will run a full operating system that is touch friendly. I didn’t want a tablet that was application based…I wanted to be able to run old programs on it but have it be a bit more mobile and have the ability to use it as both a laptop and a tablet. All the way back in June, Microsoft introduced the Surface that would come out that fall and winter…and I really thought they might have read my mind! I started saving my pennies…and when the full Windows 8 Surface Pro came out earlier this month, I made my move…and I’m sooooo glad I did! Here she is! 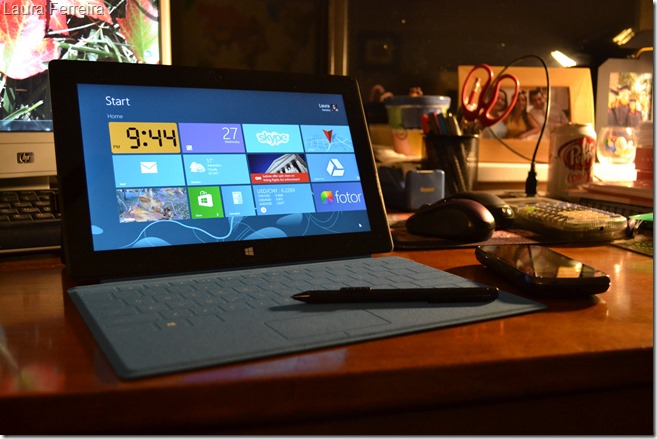 I really can’t explain how much I love this thing. It is really everything I was imagining a few years ago (and sometimes more). I can understand why some have criticized it and how it might not be the best choice for everyone…you make compromises on both ends when you are trying to merge laptop and tablet. But to be honest, based on what I knew I wanted as far back as a few years ago, those compromises actually really work well for me. The touch cover is a great keyboard and cover. The pen is actually really awesome and the handwriting recognition is amazing. It also makes navigating around the desktop on a smaller screen much easier too. I can switch between playing with apps to using a traditional desktop in a second just like I had always imagined. Even though it is a bit heavier than other tablets, I don’t need to worry about holding it too long in my lap or when I’m laying in bed because of the kickstand (sometimes working with the flipped back touch cover for stability). But even at 2 pounds it is still a lot lighter than any ultra book convertible with a full keyboard on the market right now. The battery life isn’t as good as most app driven tablets, but with a Intel processor for running full Windows, it actually is really great compared to any laptop I have ever come across. This evening I was able to get 5 hours of use off the wall, using it for most of that time. But if I put it to sleep for a while (I even did this for a whole day of work to test it) it wakes up fast, with everything I was running still saved, and hasn’t lost any noticeable battery. I really think this could get through a whole day of casual use off the wall if sleep is utilized.

Anyway…like I was saying…these compromises work well for me to have a much faster, more mobile, and flexible device. I could say so much more but I am sure I’ve written too much already! Like I said I can see why the Surface wouldn’t be for everyone…but for someone who was waiting for this exact type of combo like me…I am VERY pleased :).

PS – I have written my last 3 blog posts on it…on my lap in the living room! To be fair…I have a lap desk that I always used to use with my laptop (because of it getting so hot) and this thing has a smaller footprint than the laptop so it works really well on there. But I have comfortably used it just on my lap before with the keyboard if I need to type something casually.

PPS – Unlike in the picture above I have rarely used it on my desk besides tonight while I’m monitoring something big running on my desktop…I feel like the picture of it on my desk in front of another computer seems a bit silly haha!

That is all I have for Laura Loves this month! I’ll be back with more at the end of March!